My last post laid out several options for connecting to the cloud. In this post, I’ll dive into reliable connectivity to the cloud. In the real world, circuits drop, transceivers fail, and software bugs cause lockups or unexpected reboots. This is one of the fundamental tenants of working with technology. If you expect five nines of uptime, you must plan for component failures and unexpected outages.

When it comes to networking, reliability is typically achieved with redundancy and resiliency. Redundancy means two or more components (e.g. switches, routers, circuits) are in place to tolerate the failure of any single device. Resiliency means that the overall system continues to operate when a component failure occurs. This usually requires some configuration on the part of the operator to ensure an automated switchover occurs, and hopefully testing of every failure scenario to ensure that switchover works as expected. Having two of everything doesn’t provide any benefit if the redundant component doesn’t take over when the primary fails! 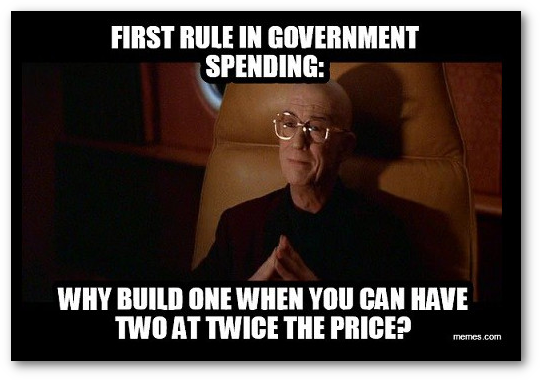 The rest of this post will focus on the specifics of reliable cloud connectivity, but it is important to consider that reliability is constructed in stages. I’m assuming that your existing network infrastructure is already reliable. If that is not the case, it won’t matter how awesome your cloud connectivity is. You must build upon a stable foundation.

In my last post, I said that SD-WAN “may be the most exciting advancement in the world of networking in the past decade.” I’m referring to SD-WAN in general terms since there is a lot of vendor-specific secret sauce baked into the various offerings. With that in mind, here are the things that SD-WAN gets right when it comes to reliability:

SD-WAN is still gaining traction, but the technology is exciting. There are several other benefits in terms of security, manageability, monitoring, and automation. If you’re building a new solution, or looking to replace aging edge hardware, SD-WAN deserves a hard look. You can build a fast, fault tolerant connection to the cloud, and even replace legacy WAN technologies like MPLS. The most important thing to consider with cloud connectivity via SD-WAN is that your chosen vendor has supported software appliances in your cloud(s) of choice. Read through their cloud reference architecture to ensure they meet your requirements. Cloud-based SD-WAN appliances are software-based, so they will have bandwidth limitations that should be taken into account as well.

If you’re not in a position to roll out SD-WAN, you will need to use the tried-and-true networking technologies that have been around for decades. Dynamic routing is the primary tool used to provide reliable network connectivity and facilitate traffic failover during an outage. There are several dynamic routing protocols that can achieve this, but when it comes to cloud connectivity you will be using BGP. Why not OSPF or EIGRP? These protocols rely on IP broadcast or multicast to find neighbor routers and form peering adjacencies, and are generally intended for use within a LAN. BGP peering is established using TCP, and it was designed to operate over a WAN or the Internet. It is, in fact, the duct tape and baling wire that holds the internet together!

BGP requires a few bits of information to get working. First, you will need to enable the BGP process on your router and assign an Autonomous System Number (ASN), which will be explained in the next section. Next, you will define which networks will be advertised by BGP. The final step is to configure a neighbor router to peer with, along with the ASN of that router. Once the peering relationship is formed, your router receives all of the known BGP routes from the neighbor.

In some cases, BGP relies on another routing protocol to be able to operate. When a router tries to establish a peering relationship, the TCP packets it sends need to be able to make it to the intended neighbor router. When using BGP to connect to the cloud, the routers involved are typically assigned addresses from within a /30 (or /31) subnet. This means no routing is required for the two devices to communicate – they are both connected to the same subnet and can communicate directly. Whether this communication happens over an IPsec tunnel or a point-to-point circuit doesn’t really matter, as long as the two devices can talk to each other.

The magic happens when BGP peering is established over multiple paths to the same destination, which is what provides both redundancy and resiliency. We’ll get into the details in a moment, but this the way we can automatically failover if one link goes down. BGP will see the destination subnets advertised from multiple neighbors, and it will pick which path is the “best” based on an algorithm. If a circuit goes down and the neighbor is no longer reachable, BGP will choose the next best path, and traffic will be forwarded accordingly. These paths can be the same type of connection, or different. Here are a few examples:

If you’re using a solution like Megaport for connectivity, their website has several example network diagrams for redundant connectivity.

BGP uses the term “Autonomous System” to represent an entity or location, and each autonomous system is assigned a number (ASN). There are a few different flavors of ASNs, but for our purpose, we only need to worry about public and private ASNs. Much like IP addresses, public ASNs must be assigned by a regional internet registry (RIR), while private ASNs (64512-65535) can be used freely within a private network. Each ASN in the routing topology must be unique, so you will need to plan your ASN usage to prevent overlaps, just as you would with your IP ranges. In some cases, a cloud provider will allow you to specify a private ASN for your cloud resources, and in other cases, it is set by the provider and cannot be changed. Check your cloud provider’s documentation to see what ASN they use so you can plan accordingly. If you have been assigned a public ASN then your life is a bit easier, since it is unique to your organization. Some commonly used ASNs are listed below.

I’m not going to get too in-depth on the inner workings of BGP, but it is worth knowing the difference between internal BGP (iBGP) and external BGP (eBGP). iBGP is the term for BGP peering between two routers within the same autonomous system. eBGP is the term for peering between two different autonomous systems. In the example diagram above, routers B and C are connected via iBGP, and the remaining connections are eBGP. Connections to a cloud provider will always use eBGP. If you are running iBGP within your network, then there is a good chance you already know more about BGP than I’m going to cover in this post!

If you’ve ever studied for a CCNA, you may get cold chills reading the phrase “BGP Best Path Algorithm”. Immediately your brain recalls the “N WLLA OMNI” acronym used to remember the steps in the algorithm, although you may struggle to remember what the letters stand for. For our purposes, the primary metric we need to worry about is the “A” – AS path length. As long as the other metrics are equal, which they typically are, BGP simply counts the number of autonomous systems it has to traverse to reach a destination to determine the AS path length. The path with the least number of autonomous systems traversed is considered the best path. Whether or not this path is the best performing or least latent is another question altogether, but these are not metrics that BGP considers as part of its algorithm. Here is another example topology to consider: 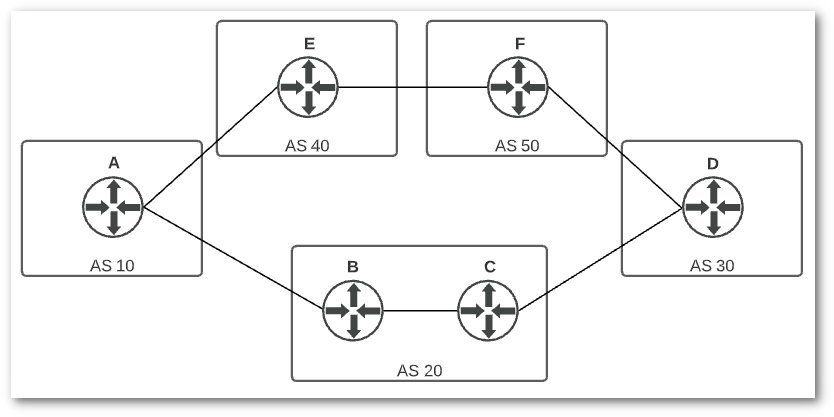 Here is an example to illustrate this concept. If router D (AS 30) prefers traffic from router A (AS 10) to arrive over the link with router F (AS 50), it can prepend 30 30 to the AS path it advertises to router C (AS 20). This new path will be advertised to router A, and the two paths router A will see to router D are 20 30 30 30 and 40 50 30. Now, the best path is through AS 40 and 50, since it is a shorter AS path. Using AS prepending is a way to influence the routing topology to behave differently from the default BGP behavior. You will frequently see this practice referred to as “traffic engineering”, although AS prepending is just one of many tools available to manipulate BGP.

By default, BGP will calculate a single path to each destination. As I mentioned earlier, that path may change if a failure happens somewhere in the network, which is exactly what we want to see. But what about the scenario where we have two high bandwidth links to a destination? It may feel like a waste of money to have an expensive circuit provisioned to merely serve as a backup. This is where Equal Cost Multipath (ECMP) comes in. ECMP allows for two or more “equal cost” routes to be installed in the routing table. ECMP is used frequently in networking to leverage multiple links at the same time, but different routing protocols handle it differently. There may even be differences in behavior between hardware vendors. Generally with BGP, ECMP has to be enabled, so refer to the vendor documentation to figure out the right knob to turn.

When properly configured, ECMP will allow you to take full advantage of the available links. A common scenario is two direct connections to a cloud provider (ideally purchased from two different carriers for diversity). When both links are working, traffic is transferred across either link based on a “hash”. Usually this is done by reading the source and destination addresses and port numbers of a packet and feeding them into a predefined calculation to produce a hash value. Even values would be assigned to one link, and odd to the other, providing a rudimentary way of balancing traffic across the links. If one circuit fails, that route is removed from the routing table, and all traffic would traverse the remaining link. Redundant and cost-effective!

By now you’ve probably read all you care to about BGP, but there are a few more components I’d like to mention.

Multiple redundant links with automated failover is your goal if you want reliable connectivity to the cloud. If it’s up to me, I’m using SD-WAN everywhere that I can. All of the complicated bits of BGP are abstracted away, leaving only the benefits. There is always a trade-off, which in this case is vendor lock-in, and perhaps cost depending on how large your network is. But BGP has been around for a long time, and it’s not going anywhere. There are plenty of network engineers who have spent hundreds of hours designing and supporting BGP, so you will seldom have to worry about finding someone that can provide support for your environment. Chose the solution that works best for you, plan, design, deploy, test, and test again. If everything goes as planned, you will have rock-solid connectivity to the cloud of your choice.